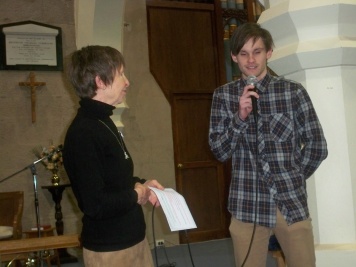 Once again it has been a pleasure for members of the Music Club Committee to run the RAG Holmes Scholarship Scheme.

At the beginning of the year we were faced with not having enough funds available to finance the number of excellent students who had applied to be included in the RAG Holmes Scholarship Scheme.

However, the Yass Rotary Club very generously increased the amount of funding from the Glenlothian Trust and for that we are very grateful indeed. Had this not happened, at least one, and possibly two, very worthy students would not have been included thereby denying the Yass Music Club not only of the pleasure of enjoying their music, but also the satisfaction of knowing the scholarship was maximising its influence.

The RAG Holmes Scholarship Scheme was formed to support young local musicians in their quest to learn music and over the last few years we have supported some amazingly talented young people from Yass Valley.  The YMC Committee can be very proud of the value these students have placed on the scholarship and their demonstration of what music means to them.

This year we had six students with an equal gender balance which was nice.

Year 12 student Maddy Brown left the district midyear but requested that she could complete her part of the scholarship agreement by performing at the Yehudiana Concert in June. Past student Ruth Giddy played beautifully on piano to accompany Maddy who performed on saxophone.

Year 12 Samuel Giddy has been an exemplary ambassador for the YMC for four years but has left the scholarship scheme this year. After just a few months at the Sydney conservatorium he was selected to go on a tour of Holland and England and he is one of only three finalists in the 2016 Open Section of the Sydney International Organ Competition.

Each year we have been thrilled to witness his progress in playing the organ and the YMC can be very proud that he will forever be ‘one of our own’!

Year 12 student Emily Parker has been part of the RAG Holmes Scholarship Scheme for just a year and unfortunately, was not well on the day of the Gold Coin Concert. However, in the spirit of a true professional she performed her piano piece and volunteered an extra one to make up for not having a voice to sing with. Her enthusiasm for music and love of performance is energising and she was a very worthy inclusion in the scholarship scheme.

Year 12 Zach Johnson was new to the scholarship scheme this year and his main interest is voice and dance but he also plays piano.  His performance of two contrasting musical theatre songs demonstrated not only his lovely voice but an ability to interpret the stories behind the songs. He will be performing in the musical ‘Wicked’ at the Canberra theatre and I’m certain it will be the beginning of the career he is dreaming of.

Year 11 Jonah Smith will be included in the 2017 scholarship. He is a prodigious talent and not only played his own pieces but provided piano accompaniment to Zach on vocals. His enthusiasm and confidence on piano was impressive.

Year 11 Sarah Giddy is a continuing student and her performance on the Steinway to promote the Gold Coin Concert was poetry in motion. She has been a wonderful ambassador for the YMC over the last couple of years and I look forward to seeing her perform again next year.

The level of musical ability together with the unassuming character of these students is something the Yass Valley Community should be very proud of.

To find out more about the Yass Music Club and to catch up with local musical happenings, listen to The Yass Music Club Hour - 2pm Every Friday on our local radio station - YassFM - presented by our own Brian Millett. Brian can be contacted on 0262263514. To visit the YassFM website go to our links page.