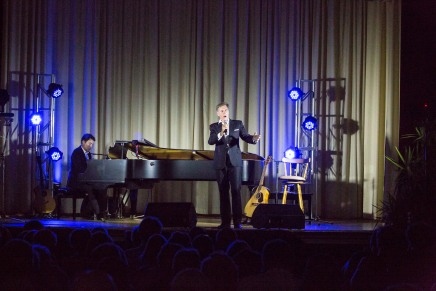 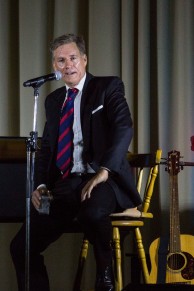 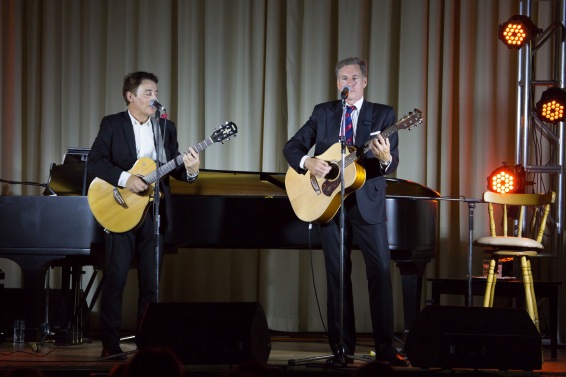 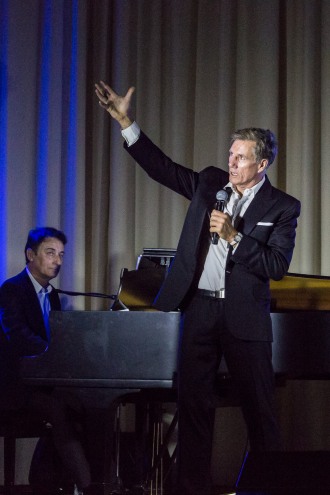 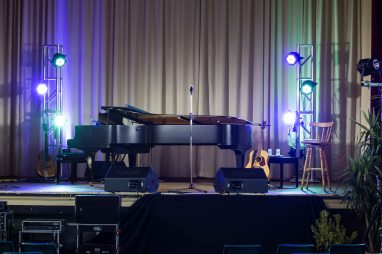 The Yass Music Club opened its 2017 subscription season in the Memorial Hall on Saturday, 11th February with a spectacular concert from one of Australia’s best known tenors David Hobson, who was ably supported and accompanied by David Cameron on piano, sitar and guitar.

The night was the hottest on record in the unair-conditioned Hall and we had some real worries about the comfort of our audience but we saw that there were plenty of fans in action and each guest was given a bottle of iced water for the occasion and this worked out very well as the night began to cool as the concert began.

David Hobson is a consummate showman and he immediately made an impact with his great voice, his friendly manner and the range of wonderful music which he presented  to us.

The concert began on a wistful note with “The foggy, foggy dew”, a traditional folk song made popular in the ’50s by Burl Ives and David was at his most relaxed as he proceeded with music from opera including Donizetti’s “The Elixir of Love” and Puccini’s “Tosca” as well as from popular musicals including “Les Miserables” and “Man of La Mancha”.  His dynamism was well observed as he took on the role of Don Quixote, the greatest Knight Errant of them all, and ‘dreamed the impossible dream’ with us living this role and all the other parts that he sang and we were spellbound by his unfolding program.

David’s presentation of “She moved through the fair”, though really a song for a female, was moving in the extreme  and David Cameron sensitively played the sitar to  heighten our experience of this piece.

The evening seemed to fly by with songs such as “Shenandoah”, “Granada”, “Hushabye Mountain”, “Raglan Road”, “Blackbird”, “Reviewing the Situation” keeping us well entertained, together with a surprise and campy  version of “Come into the garden, Maud”  all being part of David’s rich offering.

At interval Ron Badger, representing the Rotary Club of Yass, presented  Certificates and cheques to our Dr RAG Holmes Scholars, who were introduced by Ros Whiteley and they  included Zach Johnson (Voice, piano and dance),Sarah Giddy (Piano and violin), Jonah Smith (Piano), Annabelle Hansen (Clarinet and voice) and Grace Mather (Saxophone). Ros informed us that the Scholars will be presenting their own Gold Coin concert in late August at St Clements Church.

David Hobson remarked on this and commended the Yass Music Club for its encouragement of young musical talent in the Yass district.

The Yass Hospital Auxiliary provided us with a sumptuous supper  for our enjoyment and the Music Club makes its suppers and afternoon teas a feature of its concerts and it is a means of giving support to active community groups with the generous fee offered for these services. There is at least one opportunity left in 2017 to cater at one of our concerts. Contact should be made with Brian on either 62263514 or 62262128 if there is any interest here.

Our famous raffle of a CD donated by David was won by Mr Barton from the ACT.

During the evening our President, Peter Crisp spoke of the sadness of the Yass Music Club Community on the death of its oldest member, Agnes Skillin. Agnes and her family barely ever missed a concert and she will be always in our fond memory for her sweet grace and charm.

Peter also presented our guest performers with a piece of elegant Crisp glass as a reminder of their visit to Yass and we have since heard from David that they would like to return here again to  enjoy the hospitality they had received.

At the conclusion of the concert a reminder was given of our next concert on 29th April when we will be presenting the classical song group Voci Stupende and it will be designated as ‘The Katherine Holmes and Mary Reid Memorial Concert’. Voci Stupende is a remarkable group of very talented songsters and we can guarantee that they will be enjoyed in much more congenial climatic conditions than we had for David’s concert.

To find out more about the Yass Music Club and to catch up with local musical happenings, listen to The Yass Music Club Hour - 2pm Every Friday on our local radio station - YassFM - presented by our own Brian Millett. Brian can be contacted on 0262263514. To visit the YassFM website go to our links page.