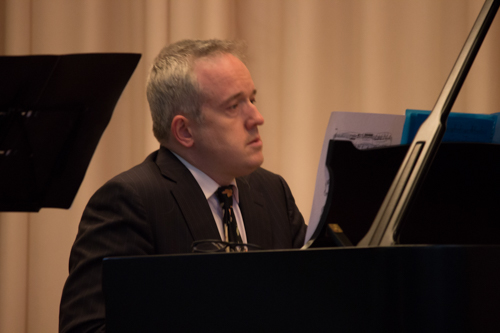 On Saturday evening 22nd February, the Yass Music club audience was very privileged to listen to pianist Clemens Leske, a member of a well-known Australian musical family. His mother, Beryl Kimber may be remembered in Yass where she played her violin twice in earlier days, and his father, also Clemens, was well regarded as both a player of piano concerti and as an academic in musical circles.  Clemens himself is now one of Australia’s most distinguished performers, having travelled the world, achieved an astonishing number of awards and played solo with all the best orchestras worldwide.  We are honoured to have him here in Yass.

“An extraordinary musician and pianist” is how Vladimir Ashkenazy described Clemens Leske, and the proof of this statement was in the concert we were given.

The first piece Clemens played was a short Scarlatti Sonata (in E major). Scarlatti wrote over 550 sonatas and this is possible his most popular. It has a Spanish flavour with what seemed to be some very tricky trills, crossed hands and a very rapid tempo in places. Clemens played it effortlessly with a delicate and lyrical touch – it was joyful and exquisite.

For the rest of the first half we heard the first 15 of the monumental Goldberg Variations by Bach. Originally written for the harpsichord these are, in total, 30 variations on a theme known as ‘Aria’. This started off with the beautiful and reasonably simple ‘Aria’ and then Clemens proceeded to take us on a complex and twisting journey through these incredible variations. The music transformed many times through different time signatures, very complicated harmonies and techniques. I think I saw some ‘thumb-undering’ at one stage which always amazes me.

Our supper was again another triumph provided by the Hospital Auxiliary. We are really spoiled and hope that this tradition continues.

After Supper the raffle was drawn and Dr. Jonathon Williams was the lucky winner of a CD. Tony Hopkinson, president of the Yass Rotary then presented the Yass Music Club Rag Holmes Music Scholars for 2020 with their certificates and cheques The funds for these scholarships, for which we are very grateful, are largely provided by the Glenlothian Education Foundation Fund and distributed by the Yass Rotary Club. We congratulate our scholars for this year: Geena Elliot, Corinne Green, Niamh Kelly, Wendy Morton, Jackson Nash, Tiernan Roberts and Becky Wright. 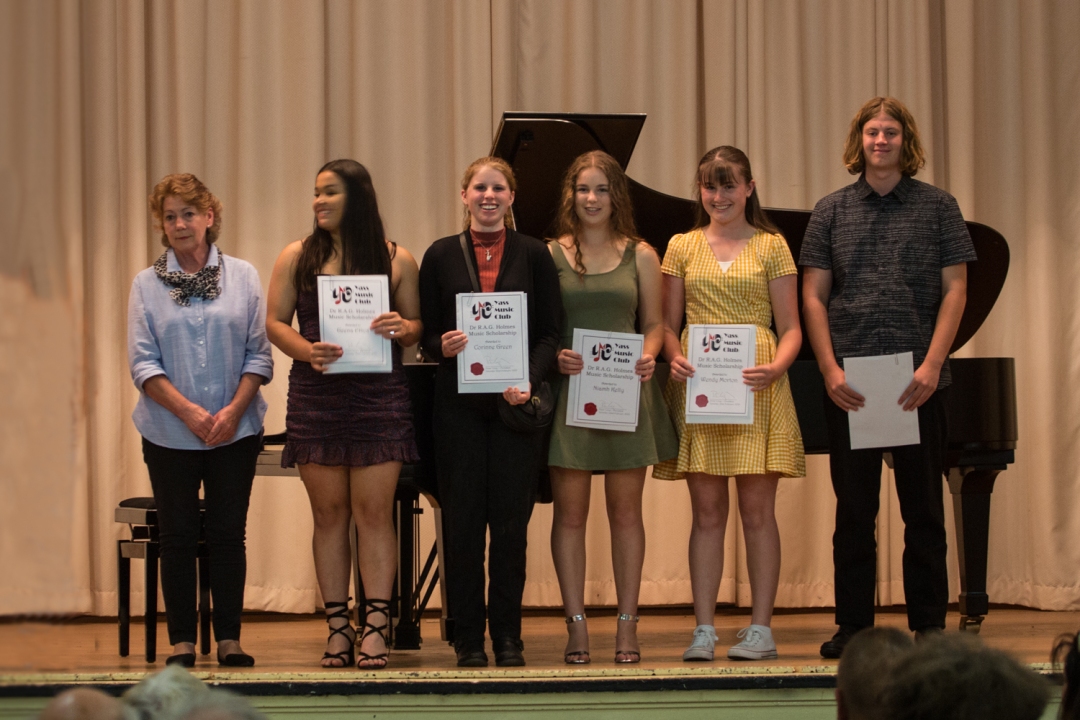 In the second half of the evening Clemens played the last 15 of the Goldberg Variations which ended with the return of the beautiful ‘Aria’. This work is quite lengthy, almost a marathon, requiring not only stamina but also remarkable virtuosity, both of which were displayed by Clemens Leske in an exhilarating performance.  Even for those of us who are not particularly versed in the technicalities of Bach’s composition this was a delight and this wonderfully expressive performance was a tribute to Bach’s enduring genius and legacy. In short, this was a master piece played by a master.

Our next concert will be on Saturday Match 28th and will feature the Canberra Bach Ensemble which is based around a choir and orchestra performing on period instruments. They recently performed the Magnificat in Canberra to great acclaim. This concert will start at 7.45pm in the Memorial Hall and non-members will pay a fee of $50 which may also be part of an annual fee to see all of our concerts. Again, a sumptuous supper will be provided.

One of Australia’s most distinguished pianists, Clemens Leske has been concerto soloist with all of Australia’s symphony orchestras (Sydney, Melbourne, Adelaide, Tasmanian, West Australian and Queensland) under such conductors as Vladimir Spivakov, Nicholas Braithwaite, Muhai Tang, Vernon Handley, Raimon Gamba and Tommy Tycho.

During his studies at the Juilliard School, New York, Clemens Leske regularly appeared at Lincoln Center in the famed ‘Bang on a Can’ and ‘Focus’ festivals of contemporary music and won numerous prizes and awards, including the ABC Young Performer of the Year, the David Paul Landa Memorial Scholarship (Australia), and the Hattori Award (London).

Leske has regularly performed with the Australian String Quartet, the Australian Chamber Orchestra, the Moscow Virtuosi and at such festivals as the Barossa International, Huntington, Spring and Adelaide. He was recently soloist with the Bangkok Symphony performing the Schumann piano concerto for the King of Thailand’s birthday concert, and with the Sydney Symphony performing the Tchaikovsky concerto, to great acclaim.

Leske has released three discs of solo piano and chamber music and has recorded extensively for Australian radio stations ABC-FM, 2MBS and 5UV.

Recent appearances include a performance at Eastbourne Festival UK as soloist with the London Philharmonic Orchestra in 2008, performances in the eight-piano Steinway Spectacular, a performance of Bach’s ‘Goldberg’ Variations at the Adelaide Fringe Festival, the World Premiere of Carl Vine’s ‘Anne Landa Preludes’ (2006) and a solo recital as part of Historic Houses Trust’s ‘House Music’ series at Government House.

Other engagements have included four appearances as soloist with the Sydney Symphony at Angel Place and the Opera House, performing Mozart’s K413 Piano Concerto in July next year; and a national tour with the very successful “Steinway Spectacular” stage show.

Future engagements include four appearances as soloist with the Sydney Symphony in July 2009, performing Mozart’s Piano Concerto in F Major, K413, and three performances of Strauss’ “Burlesque” with the same orchestra, under the baton of Vladimir Ashkenazy, in May 2010.

He is currently Lecturer in Keyboard at the Sydney Conservatorium of Music.