In any concert listening to a single guitar can be a great experience but when you have four superb guitarists appearing at the same time then it’s nothing short of the miraculous.

The Yass Music Club had that just that experience in the latest of its subscriber series in the Memorial Hall last Saturday when Guitar Trek, comprising Tim Kain, Minh Le Hong, Bradley Kunda and Matt Withers playing guitars in ensemble to produce a most eloquent musical performance from a very well chosen program which gave it ample scope to demonstrate its skills and versatility.

This group has been performing for some twenty five years from when noted guitarist, Tim Kain established it in 1987, when he had in mind to form a chamber music guitar ensemble comparable to a string quartet, inventing the guitar quartet medium to use classically constructed and different-sized guitars.

The group are now regarded as Australia’s premier guitar quartet and has been wowing audiences throughout Australia as well as internationally playing not only the original four instruments but also a steel string Dobro and a 12-string guitar and using both nylon and metal stringing  to extend the effects in their diverse program of music.

Their music ranged from a charming performance of the “Waltz of the Flowers” from The Nutcracker Suite by Tchaikovsky through Antonio Montes’ very original “Llanura” and the Spanish fire of “Danzas Fantasticus” by Joaquin Turina and on to include to several very beautiful studies by Australia’s Nigel Westlake, including “Winter in the Forgotten Valley”,  which had been specially commissioned by him for Guitar Trek, with financial assistance from the Federal government’s Arts Funding Body.

The tour-de-force of the concert was Westlake’s “Six Fish” comprising six short pieces designed to evoke images of sea creatures and in this they were very successful in creating sound images of diverse types of marine life from Guitar Fish (Very appropriate!) as well as Sunfish, Spangled Emperor and concluding with a scintillating piece called Flying Fish, which really captured the sense of these unique fish as they dive through the movement of the sea. The group gave a charming rendition of a Tango by Bizet as its encore and, to the satisfaction of the appreciative audience.

The next concert to complete this year’s great subscription series is on on Saturday, 25th October with the dynamic Meg Corson and in December there will be a Benefit Concert at the beautiful Crisp Galleries.

Subscribers will also shortly receive details of the five concerts which will comprise our 2015 season beginning on 7th February with a blockbuster performance from “The Idea of North” and there will also be a choral performance from the Llewellyn Choir of First World War music in the week  just before Anzac Day, a performance of Elizabethan Music in June and a trio in August before our final concert in October with the welcome return of pianist extraordinaire, Joe Chindamo in a duo with violinist Zoe Black.

As usual, the Berinba P&C did a wonderful job with the Supper and the Music Club regards the employment of local groups such as Berinba, the Hospital Auxiliary and the Friends of Cooma Cottage as a means of financially assisting such groups in the excellent work that they do in supporting their own community activities.

The Hall was comfortably warmed but the ongoing problem of appropriate air conditioning and heating needs to be addressed as we continue to swelter in the hot months and struggle to hear the music in cold weather because of the noise of the heaters – and just remember that beautiful Hall was built just under one hundred years with no proper attempt since to set it up for the seasonal comfort of the members of the Yass community who use it. 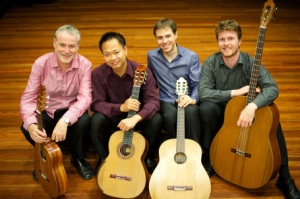 Tim Kain is Head of Guitar at the Australian National University’s School of Music and will bring his world renowned guitar quartet to Yass. This group uses a specially made family of guitars of different sizes and an exciting new repertoire for the medium with original Australian music at its heart. Guitar Trek’s strong popular appeal has led to immense success with four best-selling CD’s available on ABC Classics and regular touring both overseas and in Australia. They will perform music from South America and Spain, pay tribute to the Beatles and more.

Now a much loved part of the Australian music scene, the dynamic Australian quartet Guitar Trek was formed in 1987 specifically to launch a guitar family project, which has rapidly attained the status of a major new direction in the guitar’s continuing new development into the 21st century.

With new Australian music at its heart, the group’s fresh, innovative and popular approach to repertoire has taken it across all musical boundaries, breaking the sound barrier between different styles and tastes in the process. The new music of contemporary Australians rubs shoulders with Led Zeppelin, JS Bach, music of the Spanish masters, unbuttoned Brahms, the Beatles, the Greats of the Renaissance, George Gershwin, the Gypsy Kings and the sensuous rhythms of modern day Brazil.

Audiences and critics alike have readily acknowledged the outstanding innovative significance of Guitar Trek’s work and the group has been still more highly acclaimed for the extraordinary energy, assurance and musical quality of its playing. “The instruments were played with magnificent sensitivity”, enthused one critic, “and the transcriptions and arrangements were brilliant. As for the players, their individual and collective quality, taken with their imaginative musical leap into the unknown, has given chamber music in Australia a new dimension.”

Guitar Trek’s performing activities has included many tours for Musica Viva, performing in the capital cities as well as the regional centres of Australia, including performances in Musica Viva’s prestigious ‘International Series’. Other Australian performance highlights include appearances at the Adelaide and Sydney Festivals, and the Darwin International Guitar Festival. Guitar Trek’s four compact discs are among ABC Classic’s best sellers. A fifth release of original Australian quartets was recently released on the Tall Poppies Records label in 2012. Overseas activities to date include highly successful tours of the USA, Eastern Europe, Singapore, Brunei, Thailand, the Philippines, Korea, Taiwan and Vietnam.

To find out more about the Yass Music Club and to catch up with local musical happenings, listen to The Yass Music Club Hour – 2pm Every Friday on our local radio station – YassFM –  To visit the YassFM website go to our links page.