In the fourth concert for its 2019 season, the Yass Music Club was delighted to welcome back the Grigoryan Brothers – Slava and Leonard. The weather was bleak and cold outside but the Hall was comfortably warm and it was a FULL HOUSE. The concert was generously sponsored by Dog Trap Vineyards and they had a great selection of their excellent wines for sale and they also provided some delicious mulled wine for our indulgence. Thank you, Dog Trap Vineyard!

Our Vice President welcomed the audience and the artists and they began their program with ‘Fantasy on a Theme by William Lawes’ written by Slava and Leonard and it was the perfect piece with which to open the recital. Their playing was fluent and compelling as always and the work itself proved to be an ideal introduction to the  delightful items of classical and contemporary works to follow. All their music depends on their father, Eduard Grigoryan’s increasingly imaginative arrangements for two guitars from  works originally written for different instruments, including voice and many of the pieces were from their recent CDs.

Tchaikovsky’s ‘None but the Lonely Heart’  was the next piece they played and the audience was totally charmed by this beautiful melody. Their ability to swap parts so seamlessly, maintaining a consistent cantabile line where required while orchestrating the most affecting dynamic and timbral accompaniments, was most impressive and their bond was in their blood as well as in the. Music.

One piece that they have not yet recorded was from a Suite in Four Movements by George Friedrich Handel and it is their intention to include much more of Handel’s wonderful music.

A ‘Suite in Three Movements’ by the American guitarist, Ralph Towner, with his ‘My Foolish Heart’ association, was the delightful piece which drew the first half to a pleasant conclusion.

The Yass Hospital Auxiliary served up a very tasty afternoon tea and the CD, which the Grigoryans had donated, was won by Katrina.

The second half began with ‘This Time’, written by Leonard and as if in a play, it blended many themes and moods into a sort of dialogue between the artists alternating the scenes as they gently faded into each other.

Anton Dvorak’s ‘Songs my Mother Taught Me’ was next, from the set of four, and was lovingly constructed by the artists to revel in its familiar tranquillity and was a joy to share.

The next piece was one from the Brazilian composer, Radames Gnattali’s in Retratos (Portraits), consisting of four musical tributes to fellow Brazilians, as follows, 1.Pixinguinha (Choro); 2. Ernesto Nazerath (Valsa); 3.Ancieto de Medeiros (Schottisch) and  4. Chiquinha Gonzaga (Corta Jaca), throughout with gorgeously expressive rhythms and colour.

Music from the film soundtrack of ‘A Boy Called Sailboat’ provided their next offering and was again a piece with a Latin inspiration about a boy who found a tiny guitar and it focusses on his innocent view of life with lots of scintillating light and shade.

The concert concluded with a magical rendition of Bach’s ‘Arioso’ and Slava and Leonard received a well-deserved standing ovation from a very appreciative audience.

Attention was drawn to another concert which the Music Club is supporting to be presented in the Memorial Hall on Friday, 23rd August at 7.30pm, as ‘WhereSongBegan’ wheresongbegan@gmail.com>

Our final concert for the year is on Saturday, 12th October at 7.45pm  and will feature ‘The Idea of North’ in a very welcome return. General admission is $50 and on the following day we will feature a Gold Coin Concert for our RAG Holmes Scholars in St Clements Church on Sunday, 13th October at 2.00 pm and it is guaranteed to be a lovely occasion for the Music Club to give them a performance experience and also to show them off.

Crisp Galleries will be hosting a Yass Music Club Benefit concert in November and it will feature an outstanding jazz artist and a delicious afternoon tea will be served. More details in due course.

Continue to enjoy your musical life through the Yass Music Club. 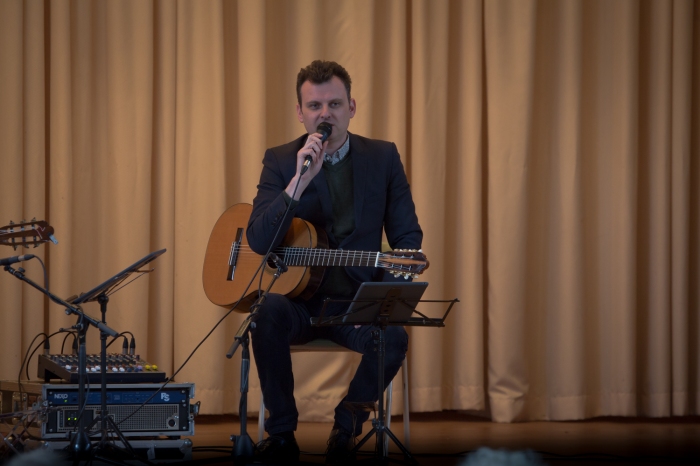 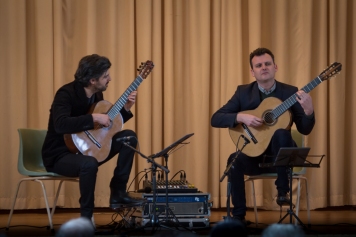 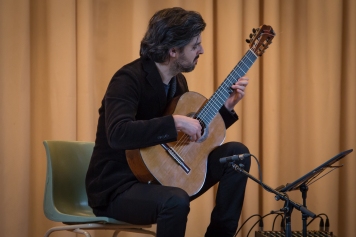 Slava and Leonard Grigoyan voted our most popular
performers from 2017. Although regarded as Australia’s
finest guitar duo performing much of the instrument’s
standard classical repertoire, the Grigoryan
Brothers’ passion is to expand their horizons through
new arrangements, their own compositions and commissions.

This ambition can be heard as the brothers take
the guitar into genres such as jazz, folk and contemporary
music. There are no boundaries, only
new frontiers to cross. In concert, mix it all together
and you have a dimension to guitar-playing
rarely seen in the musical world.
The Grigoryan Brothers have a reputation of
performing together so emphatically, they become
extensions of each other.
The brothers have also performed with symphony
orchestras and at international festivals in Australia
and Europe.
Slava continues in his position as Artistic Director
of the Adelaide International Guitar Festival, a
position he has held since 2010.