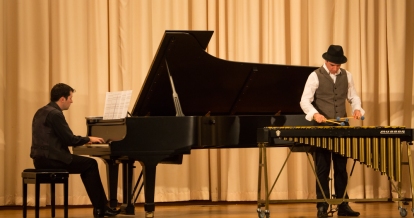 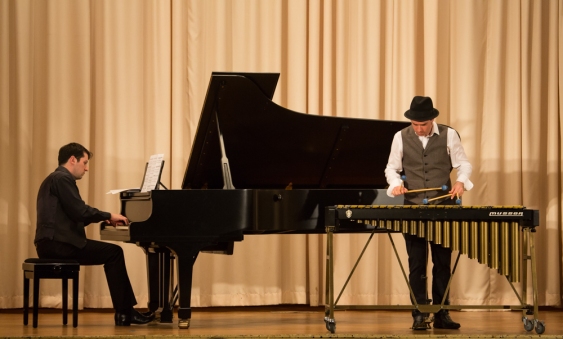 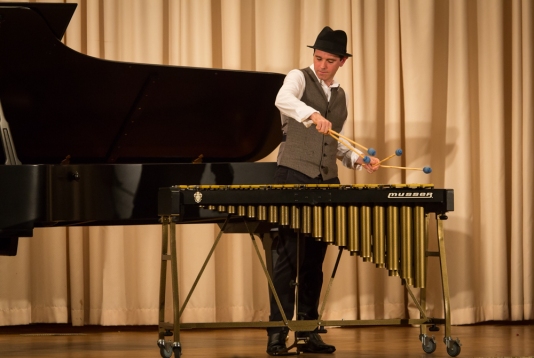 GOOD VIBES AT THEIR VERY BEST!
For the fifth and final concert for 2017, The Yass Music Club was given a wonderful treat by Nick Parnell playing his vibraphone accompanied by Michael Ierace on our fabulous Steinway grand piano. Nick’s incredible technique and spectacular mastery of the vibraphone tell us why he is labelled the ‘Vibes Virtuoso” and Michael is a most impressive and accomplished soloist who superbly managed some fiendishly difficult music. Together they gave the audience a magic evening of “Secret Songs”, seamlessly fusing jazz and classical music into a stream of enjoyment.
The opening with Handel’s “Arrival of the Queen of Sheba” allowed us all to sit back in comfort with its familiar staccato and legato melodies and begin to appreciate the wonder of the Nick’s artistry.
This was followed by “Clandestine Songs”, a terrific percussion piece which has been especially scored for Nick by Fabrizio Festa, the multitalented contemporary Italian jazz artist and composer. This was a very modern sounding piece but composed in almost traditional symphonic form; it had some wonderful harmonies and chord changes and ended in a spectacular flurry of four flying mallets.
Next we were given the lush, cheeky and at times soulful and well known Gershwin compositions “Promenade” (Walking the Dog), “Summertime” and “An American in Paris”. The first piece was written for the score of the Fred Astaire – Ginger Rogers’ “Shall We Dance”, the second from “Porgy and Bess” and the third evoking the sights and energy of the French capital in the 1920s in Paris as the visitor strolls about the city. Gershwin clearly demonstrates Nick’s love of the meeting of classical music with jazz and highlighted the magic he has in making old music sound new and energetic. At interval supper was provided at a moment’s notice by Thyme to Taste and was delicious. After interval the raffle was won by a lucky stranger and the prize was a CD donated by Nick. Two swinging Spanish tangos, one by Albeniz and the other by Tarrega, rearranged for the vibes and piano, came next and the sweet sound of the
vibes hovered over the piano accompaniment as though the music had been composed for the instrument – wonderful synergy between the two artists. Nick then played a solo piece “A Singing Song” by Gary Burton This is a true jazz piece and Nick was in his element and gave us a highly energetic and exciting improvisation in the middle. Joe Chindamo, well known to our audience, wrote the next item , “Galactic Dances” especially for Nick and his vibes so it was no surprise that it started off in a very spunky and spacey sound with truly flashing mallets, then followed a harmonious and melodic section and finished at a very fast pace in fine style showing Nick’s incredible technique at its best. Two truly elegant classical treasures then filled our hearts with nostalgia – Debussy’s Rêverie and Satie’s Gymnopédie No 1 – demonstrating that Nick and Michael could deliver the whole gamut of possibilities and indicative of Nick’s aim to bring the classics for all the world to enjoy.
This spectacular concert was completed with “Carousel“, a very contemporary piece by Samuels and Friedman – a minimalist combination of jazz and classical music.
Nick Parnell is a complete and utter star – he makes old music new again and injects energy and inspiration into his performance.
The evening was a superb blend of technically challenging and heart melting moments.
For our Sapphire Jubilee Celebrations in 2018 we have a spectacular selection of artists beginning on Saturday, 24th February at 7.45pm with Elena Kats-Chernin and Tamara Anna Cislowska “Four Hands on the Piano” then on Saturday, 14th April, an evening to remember with the outstanding baritone Teddy Tahu Rhodes, on Sunday, 17th June, the first of our two Sunday afternoon concerts at 2.00pm, with the innovative Australia Piano Quartet followed by the wonderful soprano, Greta Bradman on 12th August and the final concert for the year will welcome back the Australia’s premier concert band, the Royal Military College Band at 7.45pm on Saturday, 20th October.
Ann Holmes.

Born in the Australian outback town of Orroroo, Nick Parnell began teaching himself drums in his parents’ sheep shearing shed at the age of ten.

Such humble beginnings ignited a passion in Parnell that has led to accolades including first place in the International Melbourne Percussion Competition in 2001, a Centenary of Federation Medal awarded by the Australian Government (for contribution to the arts) in 2003 and the Dame Roma Mitchell Churchill Fellowship in 2011.

Parnell completed his music studies at the Elder Conservatorium of Music, University of Adelaide (Australia) and was awarded a PhD in 2010. He also studied and undertook master-classes with many of world’s great percussionists including Uffe Savery from the famed Safri Duo, Evelyn Glennie and Gary Burton.

A creative spirit who believes a greater level of artistry is possible, Parnell very quickly became attracted to the beauty and subtlety of the vibraphone, to which he has applied his dexterity to become one of the world’s great vibraphone virtuosos. However, his prodigious musical talents extends across a range of percussion instruments from marimba to various exotic drums.

He has given over 15 tours in throughout Australia within the last decade and brought his vibraphone to enthusiastic audiences in SE Asia and the UK.

Parnell has recorded a number of albums – Generally Spoken It’s Nothing but Rhythm, Classical Vibes and Vibes Virtuoso – released by ABC Classics. His new album Secret Songs will be released in 2017.

A passionate educator, Parnell has presented hundreds of masterclasses including the Sydney Conservatorium of Music, Elder Conservatorium of Music, West Australian Academy of Performing Arts, University of Melbourne as well as many schools. In 2015 the Nick Parnell Percussion Academy was established to support percussionists and teachers of all levels strive for musical excellence.

As one of the first musicians to bring the vibraphone to the attention of the classical music world, Parnell’s ongoing ambition is to break down the elitism of classical music and make it available for everyone to enjoy.